Let’s take a quick look at the big three movies the studios hope you’ll be splashing your cash on come Friday.

In The Switch (2/5), upwardly mobile singleton Jennifer Aniston decides to beat Mother Nature to the punch and have a baby, using a carefully selected donor. But her (secretly in love with her) best friend Jason Bateman secretly swaps the samples and, nine months later, Jen’s a mommy but doesn’t know that Jason’s the daddy. Heee-lariousness ensures. It’s only a strong turn from Batemen that stops this from being another Aniston-lead romcom abomination but even then it’s a close call as director Josh Gordon plays it strictly by the numbers. 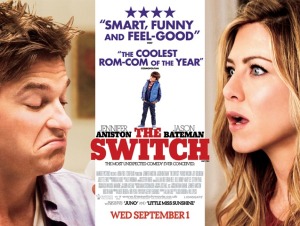 If you’re after a decent comedy then you’d best avoid Dinner For Schmucks (2/5) ‘cos laughs are well and truly off the menu in this loose remake of French movie Le Diner De Cons. The vague plot sees Paul Rudd working for a boss who likes to host dinner parties where his guests have to invite the biggest ‘schmuck’ they can and a run-in with Steve Carell’s oddball tax inspector provides Paul with the perfect +1. Despite a decent supporting cast including Zach Galifianakis and David Walliams, this whole thing feels wildly misjudged and awkward and it really struggles to raise a smile let alone any belly laughs.

And the third biggie this week is The Last Exorcism (3/5), which I’d been assured would give me sleepless nights. Shot in a documentary style, it centres on a former Louisiana preacher whose lost his faith and is now out to expose the sham of exorcism. However his ‘final case’ proves to be more of a test than he could have imagined. Admirably tense and with a few bladder testing shocks, this is solidly scary enough but a bungled final five minutes do let things down a bit.

This entry was posted in Uncategorized. Bookmark the permalink.